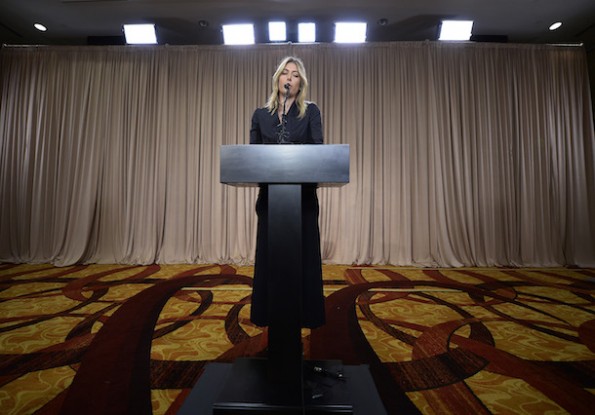 Earlier today, it was revealed that Maria Sharapova would be holding a press conference at some point this afternoon.  Some believed the 28-year-old tennis star may be announcing her retirement—and stealing some thunder from Peyton Manning’s retirement announcement in the process.

As it turns out, Sharapova is not retiring.  Rather, she failed a drug test at the Australian Open back in January.

During her presser at a downtown Los Angeles hotel, Sharapova told the media that she had been taking the drug meldonium for the past 10 years to help her deal with a recurring flu, irregular EKGs, and possible diabetes. The drug was previously allowed, but on January 1 it became illegal.

Sharapova claims she was unaware of this rule change but has taken full responsibility for her mistake.

“I take great responsibility and professionalism in my career every day. I made a huge mistake,” Sharapova told reporters. “I don’t want to end my career this way, and I really hope I’m given another chance to play this game.”

Sharapova says she received a letter from the International Tennis Federation on March 2nd, but has not yet been informed of her punishment—which could be anything from a lengthy suspension to a minimal fine.

Here’s a look at her press conference: