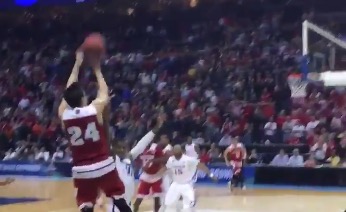 It was hard to pick just one defining play from the first few days of the NCAA tourney, but many would claim that Wisconsin’s last-second three to win Sunday’s second-round matchup against Xavier, 66-63, easily takes that claim.

The Bronson Koenig shot took place directly in front of the Badgers’ bench, which meant that it took all of three-tenths of a second for the team to swarm him after the shot fell at the buzzer.

It was quite a site on television, and it seems to be even more exciting from behind the bench. One person, confident something big was about to happen, took film that shows just how crazy the celebration was:

The only way this could have been better is if Koenig was wearing a GoPro on his head.