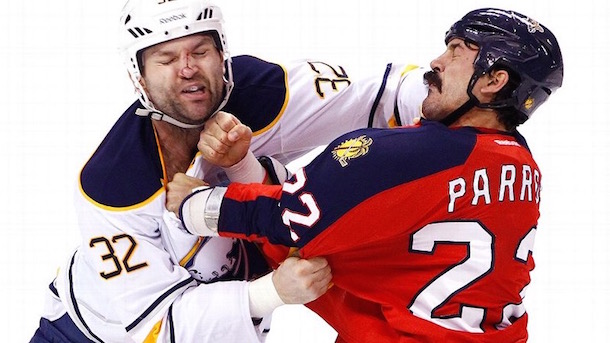 The NHL is currently the defendant in a lawsuit by former players who claim the league downplayed the danger of repeated head injuries, instead putting profits ahead of safety. On Monday, the federal court hearing the case released a trove of NHL emails at the request of the players. And in one series of emails between NHL commissioner Gary Bettman, deputy commissioner Bill Daly, and then-head of player safety Brendan Shanahan, Daly expresses his opinion that there is a link between fighting, head injuries, and “personal tragedies” such as depression and suicide.

The series of emails in question were sent on September 3, 2011, the day after the Globe and Mail published a story about the tragic deaths of hockey “goons” Derek Boogaard, Rick Rypien, and Wade Belak.

Here’s an excerpt of the emails, presented in dialogue form:

Bettman: “Do you remember what happened when we tried to eliminate the staged fights? The ‘fighters’ objected and so did the pa [NHLPA]. Eliminating fighting would mean eliminating the jobs of the ‘fighters’, meaning that these guys would not have NHL careers. An interesting question is whether being an NHL fighter does this to you (I don’t believe so) or whether a certain type of person (who wouldn’t otherwise be skilled enough to be an NHL player) gravitates to this job (I believe more likely).”

Bettman: “I believe the fighting and possible concussions could aggravate a condition. But if you think about the tragedies there were probably certain predispositions. Again, though, the bigger issue is whether the [NHLPA] would consent to in effect eliminate a certain type of ‘role’ and player. And, if they don’t, we might try to do it anyway and take the ‘fight’ (pun intended).”

Shanahan: “The previous regime at the [NHLPA] definitely would fight it. But I thought their current position on illegal checks to the head is that it should encompass ALL contact, If we keep this simply about concussions and brain injuries then how can they argue against it… This is not the same role as it was in the 80’s and 90’s. Fighters used to aspire to become regular players. Train and practice to move from 4th line to 3rd. Now they train and practice becoming more fearsome fighters. They used to take alcohol or cocaine to cope. (Kordic) Now they take pills. Pills to sleep. Pills to wake up. Pills to ease the pain. Pills to amp up. Getting them online.”

Bettman: “Agree, but remember you are about to try to take a certain type of player (or aspiring player) and tell him his ability to earn more money than he could probably make doing anything else is over! The current head of the union spent a decade in baseball protecting steroid users over what was best for the vast majority of his players and the game.”

The lawyer for the players argues that these emails show the NHL knows or believes that there is a link between fighting, repeated concussions, depression, and other health issues. However, the court may not see it that way. Commissioner Gary Bettman is clearly skeptical of the notion that fighting alone leads to “personal tragedies.” And the conversation also brings up another point: that the NHLPA and therefore the players themselves might be equally responsible for ignoring potential health risks of repeated head injuries.

In the end, the court might just decide that any reasonable person should probalby realize that bare-knuckle boxing on skates might be bad for their health.