Former Major League Baseball pitcher Curt Schilling has been fired by ESPN after he shared an anti-transgender meme on Facebook.

What Schilling wrote and shared:

“A man is a man no matter what they call themselves. I don’t care what they are, who they sleep with, men’s room was designed for the penis, women’s not so much. Now you need laws telling us differently? Pathetic.” 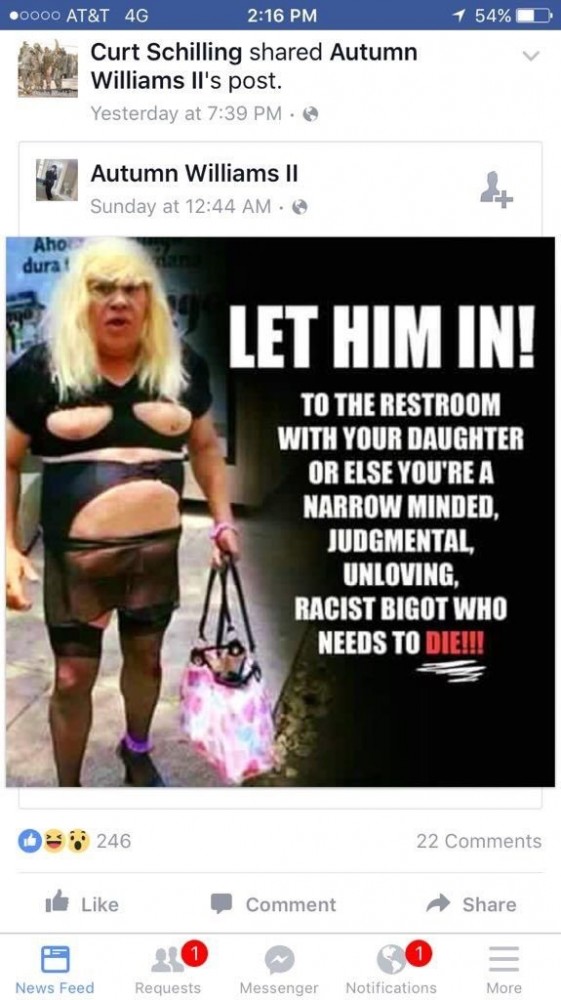 On Wednesday, ESPN dropped the hammer and fired the former MLB pitcher. ESPN released a statement:

“ESPN is an inclusive company. Curt Schilling has been advised that his conduct was unacceptable and his employment with ESPN has been terminated.”

Schilling basically forced ESPN’s hand especially after he ranted about it Tuesday on his personal blog.

Here’s what he had to say:

Let’s make one thing clear right up front. If you get offended by ANYTHING in this post, that’s your fault, all yours.

And for you people too dense to understand this one very important thing. My opinion, 100% mine, and only mine. I don’t represent anyone but myself here, on facebook, on twitter, anywhere.

“I do NOT care what color you are, what race, what sex, who you sleep with, what you wear. I don’t care and I never have,” he wrote. “I have opinions, but they’re just that, opinions.

“And opinions are like buttholes, everyone has one and they usually stink.”