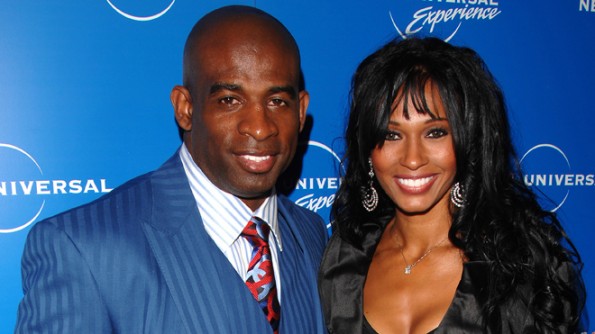 Former NFL CB & Hall of fame player Deion Sanders was awarded a $2.2 Million suit against his ex-wife Pilar for defamation he brought against her last year. The lawsuit came about when Pilar gave interviews as well as posting online about how Deion physically abused her resulting in the enormous settlement, which offset any money that he owed her as part of their divorce settlement.

Pilar is not done and wants to keep fighting, but wants a judge to help her because she doesn’t have the money to file an appeal nor pay any of her bills.

“Pilar filed docs in her divorce case explaining she is too broke to pay the court fees to file an appeal. She states she has 3 children – 2 sons and a daughter – all that live with Deion at the moment.

Pilar informs the court that she has been unemployed for over 15 years due to her being a homemaker for Deion and the children. She spends $0 in rent a month (she currently lives with her mother & sister), $9 for health insurance, $400 for child care, $200 for food and she isn’t making any money from work.
She explains she has had to take out a $15k loan for expenses, owes $3k to Target, $5k to Visa and $6k to Sam’s but can’t afford to pay any of those bills and has had to take loans from family through the years and can’t pay them back.

Pilar says that she has a 2.2 million dollar judgement owed to her ex-husband but she has no assets, property or valuables to pay it. She claims that she has never received a dime from Deion Sanders that he was ordered to pay and has no savings or retirement.”