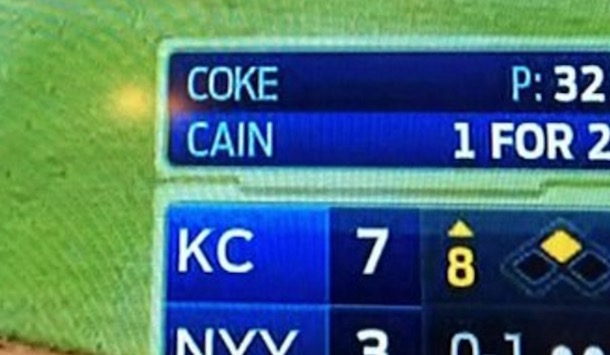 Bryce Harper vs. Jordan Zimmermann, Miguel Cabrera vs. Max Scherzer, and Noah Syndergaard vs. Adrian Gonzalez.  Those were just a few of the marquee batter vs. pitcher match-ups that Wednesday night had to offer.

My favorite?  I’m going to have to go with the one featured during the 8th inning of the Royals-Yankees game, when Lorenzo Cain stepped to the plate against Phil Coke. (Get it? Coke-Cain? Cocaine!)

The Internet seemed to enjoy that match-up as well.  Here’s how they reacted to the Coke-Cain battle:

RT when you see it ❄❄❄ pic.twitter.com/Lj2fX0mgbY

Welp, as much as I hate to glamorize it, seems the combo of CokeCain is working out well for us. #CmonThatsFunny pic.twitter.com/sgUOcF9R31

makes me miss my old fantasy team name: CokeCain is a Hellickson of a Drug https://t.co/fUtEiwbaIY

The Coke – Cain pic reminds me of this vine https://t.co/X5DNbg4d4d

A Coke Cain matchup? The 1986 Mets would have been so excited. pic.twitter.com/0o45xXMysm