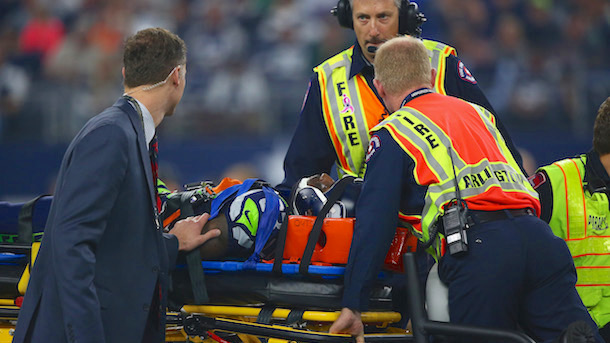 Until last season, Ricardo Lockette was probably best known as the Seattle Seahawks receiver who would have scored a Super Bowl-winning touchdown had Malcolm Butler not come along and intercepted the ball. However, that changed on November 1, 2015. During a game in Dallas against the Cowboys, Lockette was the victim of a blindside hit that broke his neck and effectively ended his career.

Lockette has talked about the injury since then, praising the trainers and paramedics for saving his life. But he goes into much greater detail for a new article in The Players’ Tribune, and the story he tells is as moving as it is terrifying.

He starts by running through a list of the thoughts running through his head while he was lying on the turf in Dallas. “Am I deaf?” he writes. “Am I paralyzed? What is going on? Am I about to die? Please, somebody come help me.”

After that Lockette reflects on the realization that suddenly hit him:

“It’s crazy what matters to you when you’re in that situation. Cars, jewelry, big houses, Super Bowls? It all seems so meaningless… I used to want a black Lambo and a seven-room house. That’s what I dreamed about.

“Now, all of a sudden, I can’t move. And the only thing that mattered to me in the entire world was being able to see my family again, to hold my kids in my arms.

“Then I remembered something that broke my heart. My daughter was in the crowd. It was her 10th birthday. She wanted to come down to Dallas to see me play. Now she was watching her daddy lying on the field, surrounded by teammates and trainers.”

A little later on Lockette shares a moving story about an encounter he had with a homeless man outside his apartment in Atlanta and reflects on what he wants to do with his life.  He also talks about the inspirational friendship of Marshawn Lynch, who stayed in Dallas to be with Lockette in the hospital after the rest of the Seahawks returned to Seattle:

A lot of people don’t know the real Marshawn. They don’t understand what kind of a man he is, and how much he does for his people in Oakland. My goal in life is to have 10% of the effect that Marshawn has on people’s lives.

When I was taken to the hospital in Dallas, Marshawn stayed in my room with me the whole first night. This dude had me laughing so hard that he was putting my damn life in danger. I’m laying in bed with a full neck brace, just trying to stay still, and he’s just being Marshawn — talking to the nurses, making jokes, being crazy.

If you read anything else on the internet today, read Ricardo Lockette’s article on The Players’ Tribune. It really is excellent.