>Total Pro Sports
NFL
Los Angeles Rams Getting Their Own Reality TV Show on E!, Are Now Kardashians of NFL

Los Angeles Rams Getting Their Own Reality TV Show on E!, Are Now Kardashians of NFL 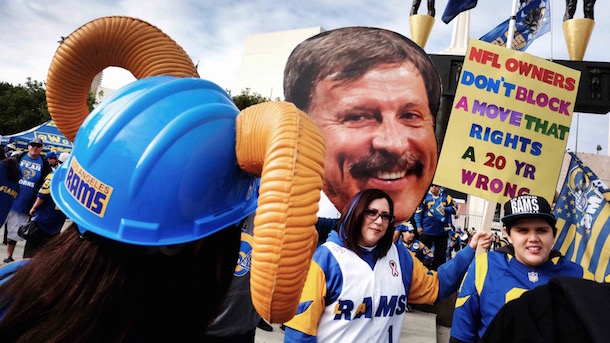 If football fans in Los Angeles thought they were getting an actual NFL team whose number one priority is winning, they thought wrong. On Wednesday the E! network announced they had greenlighted a new reality series called Hollywood & Football that will follow six Rams players and their families as they make the transition from life in St. Louis to life in Los Angeles.

Yes, that’s in addition to HBO’s Hard Knocks, which will also follow the Rams’ move from St. Louis to Los Angeles. The Rams are now the Kardashians of the NFL.

“We are excited to take viewers inside the exclusive lifestyles of these top athletes and their families as they navigate a new city, new friendships, new schools and the inevitable Hollywood gossip,” says Jeff Olde, executive VP of programming. “E! has a track record of success with pop culture programming centered in the world of sports, and this series will capture the off-the-field perspective of one of football’s most anticipated and high-profile events as the Rams return to L.A.”

The show is scheduled to premiere this fall, though there is no official release date just yet. Hopefully none of those guys gets cut before then.