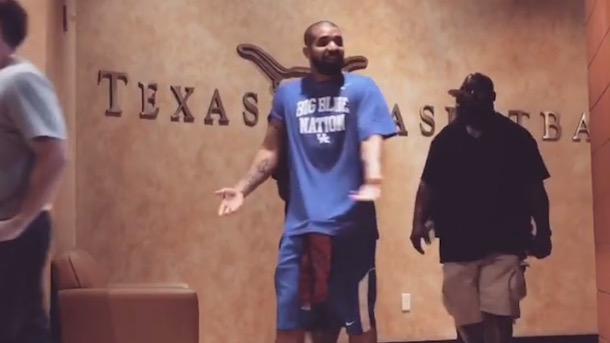 As you probably know, Drake is a huge sports fan who takes full advantage of his celebrity status to gain insider access and VIP treatment whenever and wherever possible.

Well, on Wednesday night he was in Austin, Texas, to kick off his “Summer Sixteen” tour. So obviously on Wednesday afternoon he went to the University of Texas for a workout and tour of the Longhorns basketball facilities.

The women’s basketball team? They played it super cool as Drake walked by. However, as soon as Drake was gone these grown women were rolling around on the ground, jumping up and down, and screaming their heads off like 13-year-old fangirls.

In other words, it was hilarious. Take a look:

Drake is in the building. Obviously our girls played it cool #FanGirls (video courtesy of Emily Johnson)

My mans drake came thru and showed us some love… The UK gear gotta go tho pic.twitter.com/4Zr03C8c0s

You’ll notice Drake showed up at UT dressed head to toe in Kentucky gear. While this didn’t piss off Texas fans, they couldn’t just let it slide, either:

@LonghornNetwork @Drake you wore a Big Blue Nation t-shirt on the 40 acres. #comeonman

Apparently Drake showed up at some Texas sports facilities wearing UK gear today….on another note this isnt surprising to the #BBN

I love how Drake goes to the university of Texas and walks around their basketball facility meeting players wearing a UK bball shirt. #BBN