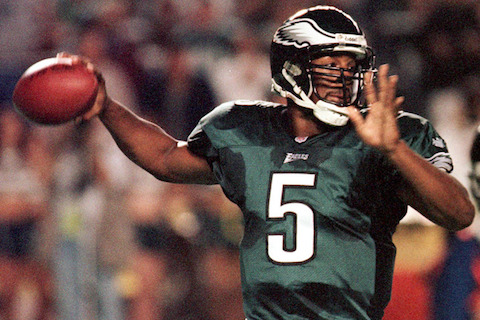 Former Philadelphia Eagles quarterback Donovan McNabb is not a fan of the team when it comes to making quarterback decisions.

McNabb thinks those were all DUMB decisions. McNabb explained to Dan Levy of BillyPenn.com his frustrations with the Eagles’ decisions:

“So now you’ve got Doug [Pederson] in the same situation with Chase Daniel and now you sign — which was dumb — you sign Sam Bradford to a multi-year deal and give him big money, then you trade picks to move up to No. 2 — that was dumb,” McNabb said. “I mean, nothing against Carson Wentz, but why would you do that? That’s just a bad business decision from the Philadelphia Eagles.

“I think for Philadelphia — for the fans — I think everybody needs to just step back and kind of watch it develop. If Sam comes out and stays healthy I think Sam can do a pretty decent job at least to hold the fort down and see where they’re at,” McNabb said. “If they’re .500 eight games in, do you make a decision then or do you just kind of let it ride out? I think for Doug, Doug is going to let it ride out at least until about Week 10 or Week 11 and then when the crowd is down and they’re not playing well, I think you get the crowd back by bringing in the young kid in.”