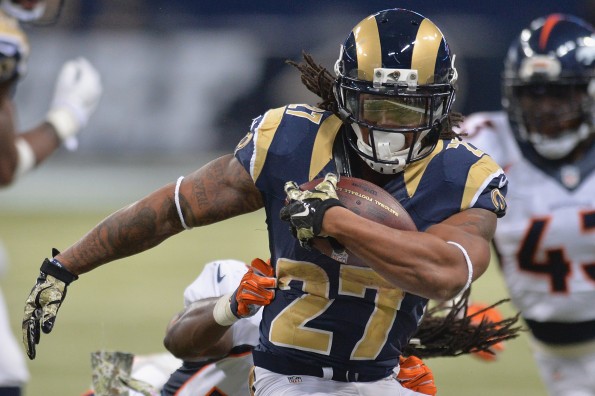 The downward spiral of Los Angeles Rams running back Tre Mason continues to get worse by each passing day. The start of the 2016 NFL season begins this Sunday and Mason hasn’t reported or spoken to anyone on the Rams since the end of last season.

“I haven’t personally spoken with Tre since the season ended,” coach Jeff Fisher said. “I tried numerous times to reach him. Tre has made a decision not to communicate with us, not to talk. Not talking to his teammates. Right now we’re more concerned about Tre Mason’s well-being than we are his football career.”

Cops have been called to his house 5 times in 4 months.  He’s led cops on an ATV chase and his mother informed police officers that her son has the mind of a 10-year-old as a result of his football related head injuries.

According to TMZ, Mason is in trouble with the law yet again as an arrest warrant was issued after he failed to show up for court.

“More troubling news for Tre Mason — another arrest warrant has been issued for the L.A. Rams running back after he failed to show up for a mandatory court appearance … TMZ Sports has learned.

Mason was ticketed for driving with a suspended license on August 13th in Palm Beach, FL and was told he needed to appear before a judge on September 7th.

According to court records, the 23-year-old was a no-show … so the judge issued a warrant for his arrest. When he turns himself in, his bond will be set at $2,000.”