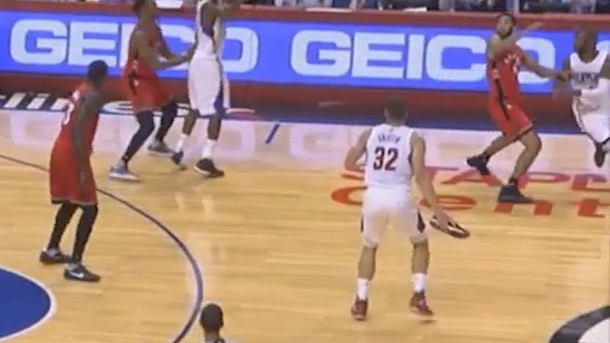 Blake Griffin threw a shoe at Cory Joseph‘s face on Wednesday night. That’s not the first sentence I expected to write today, but here we are.

The Raptors were in Los Angeles for a preseason game against the Clippers. About midway through the second quarter, Clippers guard Jamal Crawford lost his shoe while trying to evde Toronto’s Norman Powell at the top of the key. Griffin, concerned about his teammate’s low shoe-having percentage, picked it up to give it to him. But just then Crawford passed Griffin the ball. So Griffin tossed the shoe away, and it caught Toronto’s Cory Joseph right on the chin.

It was good to see Griffin and Joseph having a laugh about it afterward. But, like, that was still a foul, right?

Nope! It would seem the refs were caught off guard by the incident and did not know what foul to call.

And who could blame them? I mean, honestly, who throws a shoe?