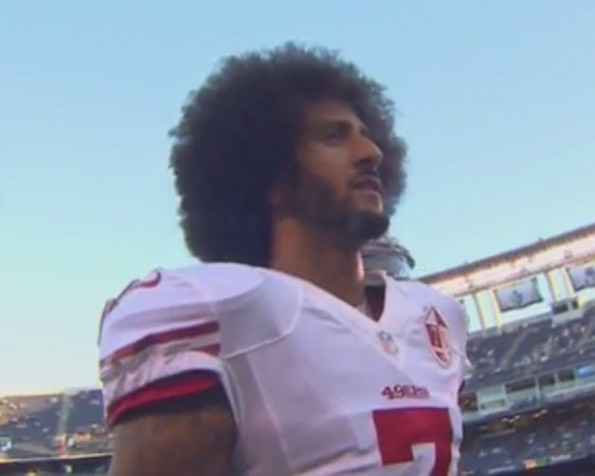 San Francisco 49ers quarterback Colin Kaepernick returned to his starting position on Sunday against the Buffalo Bills, throwing for a 53-yard touchdown in the first half.

At some point during the game, a Buffalo Bills fan reportedly threw a beer bottle at Kaepernick and was promptly escorted out of the stadium.

A fan just threw a beer bottle at #49ers Colin Kaepernick on the sideline. The fan was escorted out by security. Hope the fan was arrested!

After the game, Kaepernick was asked about the beer bottle throwing incident as he was unaware about the situation.

“If they did, they had really bad aim.”

Before the game, Kaepernick was boo’d heavily by Bills fans for kneeling and he had this to say:

“I don’t understand what’s un-American about fighting for liberty and justice for everybody; for the equality that everybody says it stands for. Now, to me, I see it as very patriotic and American to uphold the United States to the standards it says it lives by. That’s something that needs to be addressed,” Kaepernick toldreporters postgame.

“I don’t understand what’s un-American about fighting for liberty and justice for everybody.” -Colin Kaepernick