Bill Walton Used Twitter to Put Pressure on Airline to Find His Lost Bike, and It Worked! (Tweets) 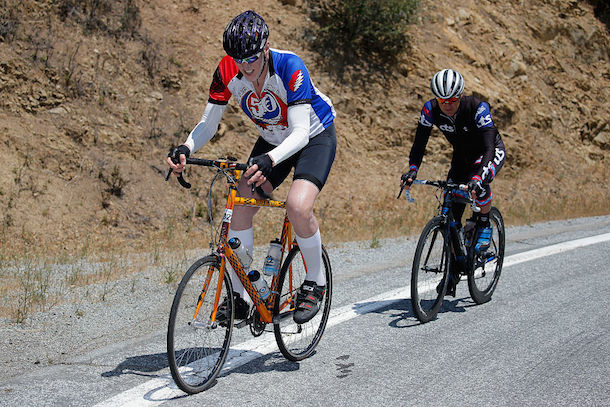 Cycling is a major part of Bill Walton‘s life. The retired NBA legend has struggled with debilitating foot and back pain his entire adult life. At one point he said he even contemplated suicide. The one thing that has helped him cope over the years is cycling. His Bike, he told the Wall Street Journal back in April, is “the most important thing I have. It is my gym, my wheelchair and my church all in one.”

Of course, seeing as how Bill Walton is 6’11”, he can’t ride any old bike. He has to ride a custom-made bike with a 70 cm tube. And unfortunately, on Sunday the folks at Hawaiian Airlines misplaced his custom-made bike at the Honolulu Airport.

Now, Walton is a nice guy, so he didn’t go ballistic on Hawaiian Airlines immediately. However, after waiting around at the airport for five hours with no progress, he finally decided to light a fire under their asses by going public with his struggle on Twitter.

Will the people at @HawaiianAir in Honolulu please give me my bike back,

I love my bike, I need my bike” pic.twitter.com/mqijDYWaM7

@BillWalton Bill, we apologize for the inconvenience. Can you send us more details in a PM?

@HawaiianAir I waited at the Maui airport yesterday for five hours and my bike never showed up. No one could tell me where it is.

@BillWalton Can you send us your email and confirmation code in a PM?

@HawaiianAir Why, are you going to email my bike?

@BillWalton Bill, i’m going to create a case for you and try to expedite the process. I’m sorry for the inconvenience.

@HawaiianAir @BillWalton: Create a case?! It’s simple: Find Bill’s bike and deliver it to him. Bill doesn’t need a case; he needs his bike.

Amazingly, Twitter was very supportive of Walton. And he was very appreciative.

Fortunately, all the tweeting worked. Six hours after taking the fight public, Walton got his bike back.

I KNOW I got my bike back because of your tweets to Hawaiian Air, I didn’t have any luck until then. Thanks everyone! pic.twitter.com/ZECZDWRnR5

My bike is back!! Things are A LOT better now. Thanks Twitter and @mauicyclery for your help. I’m off to the volcano pic.twitter.com/n8BMjAXC7s

Man that thing is HUGE!