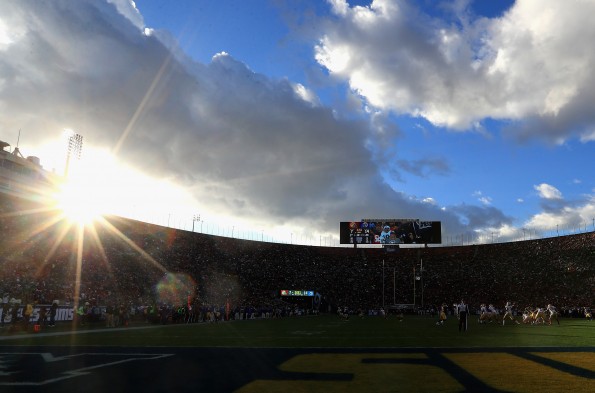 It took over twenty years for the Los Angeles area to get a football team back when the Rams left St. Louis and returned to LA.

In just a few months, the LA area will have two teams as the San Diego Chargers plan on moving there before next season, according to ESPN’s Adam Schefter.

A stunner: Chargers plan to announce as early as Thursday they are moving to LA, ending 55-year stint with SD, league sources tell ESPN.

“The Chargers plan to announce as early as Thursday that they are moving to Los Angeles, ending a 55-year stint with San Diego and returning to their birthplace, league sources said.

The Chargers played their inaugural season in Los Angeles in 1960 before moving to San Diego in 1961.

The Chargers have notified NFL commissioner Roger Goodell, and other league owners, of their intent to move to Los Angeles for the 2017 season, sources said.

But as one league source cautioned Wednesday night, Chargers chairman Dean Spanos has yet to send a formal relocation letter to the NFL, yet to notify public officials in Los Angeles or San Diego of the team’s move, or even tell the members of the San Diego organization about his plans. The source insisted nothing is final.

But unless Spanos unexpectedly changes his mind at the last moment — and there certainly have been enough plot twists in this San Diego stadium saga — the Chargers will be moving to Los Angeles.

This is said to have been an extremely difficult decision for Spanos to reach, sources said. While the economics of the decision have been crystal clear, Spanos’ loyalty and connection to San Diego have countered it. But in the end, Spanos’ efforts to find a new stadium are now in their 16th year, with no solution in sight. This stalemate is occurring at a time when the Rams are becoming more established in the Los Angeles market. Spanos is said to believe he needs to start fighting for the Los Angeles market as soon as possible.

As of Wednesday night, the Chargers’ intent is now to become the second team in less than a year to move to Los Angeles, ending the 55-year stint with San Diego and giving Los Angeles two NFL teams after going more two decades without having one.”