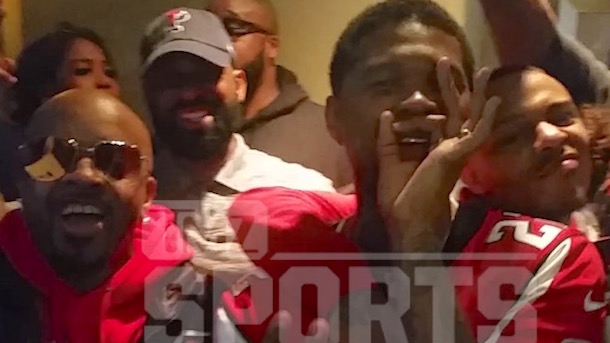 The New England Patriots may be slight favorites to win Super Bowl 51. However, the Atlanta Falcons have the edge when it comes celebrity fans.

Sure, the Patriots have Mark Wahlberg and Ben Affleck. But the Falcons have literally everybody from the red hot ATL music scene, including Usher, Ludacris, Jeezy, Jermaine Dupri, Da Brat, and Bow Wow. And all of them were at the Georgia Dome on Sunday to watch the Falcons destroy Aaron Rodgers and the Packers.

As you would expect, the folks at TMZ got some video of the celebrations, which took place both on the field itself and in a luxury box.

Looks like they had a pretty fun party. The only thing it was missing was that woman sitting courtside at the Hawks-76ers game on Sunday. If I were Usher, I would definitely figure out who she is and invited her to the Super Bowl.

Wait, scratch that. I’m being told that—yes, Usher is married. He’d better not do the inviting. Maybe Jeezy had better ask the woman from the Hawks game to the Super Bowl.