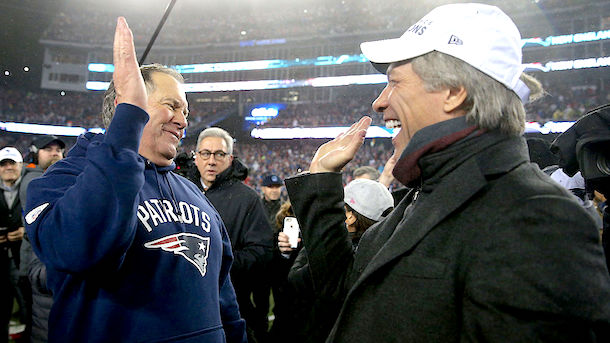 The Patriots have opened as early favorites to beat the Falcons in Super Bowl 51.

This is not shocking news. The Patriots were favored to win Super Bowl 51 before Super Bowl 50 was even played. That changed slightly when the NFL suspended Tom Brady for the first four games of the season. But it changed right back when the Pats went 3-1 without Brady. And it remained that way as the Patriots cruised to another 14-win season.

On Sunday, Vegas oddsmakers installed Brady and company as three-point favorites to beat the Falcons in the Super Bowl before they had even finished off the Steelers in the AFC Championship Game.

The points total was set at 58, which is the highest over/under in Super Bowl history. That is a testament to a couple of high-powered offenses led by a couple of incredible quarterbacks. Tom Brady went 32-for-42 with 348 yards and three touchdowns against Pittsburgh on Sunday. Meanwhile, down in Atlanta, Matt Ryan cemented his status as an elite NFL quarterback by going 27-for-38 with 392 yards, four touchdowns, and zero interceptions against Green Bay.

In case you were wondering, the favorite has a .640 winning percentage in the Super Bowl, having won 32 of 50 games. However, Tom Brady’s Patriots were involved in three of those upsets.

The Pats were 14-point underdogs against the “Greatest Show on Turf” St. Louis Rams at Super Bowl 36 but wound up winning 20-17 on a last-second field goal by Adam Vinatieri. In Super Bowls 42 and 46 the Patriots were 12 and 2.5-point favorites against the Giants, but as you probably know they lost both games.