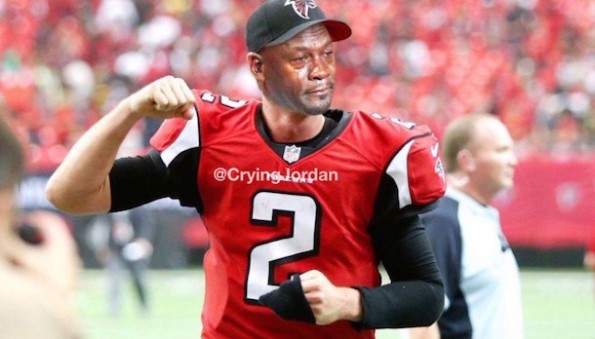 The Atlanta Falcons held a 25-point lead during the third quarter of Super Bowl LI, but they would go on to blow that seemingly comfortable cushion before losing in overtime to the New England Patriots, 34-28.

Not surprisingly, the internet was quick to pile all over the Falcons for their epic choke job.  Here are some of the best reactions to Atlanta’s collapse in the Super Bowl:

Another look at that Patriots comeback pic.twitter.com/Me8RuQnC0R

At least you still got Home Depot! pic.twitter.com/KPTbHeFdgn

how many superbowls have the atlanta falcons won? #SuperBowl #Patriots #Falcons pic.twitter.com/ca2HTKw5Ae

H1Z1, come watch me choke harder than the falconshttps://t.co/5chsa2jvLM pic.twitter.com/ti3F2DuzlB

Warriors fans after the falcons choked a 28-3 lead pic.twitter.com/EBumvkRRXb

The Falcons press conference gonna be like #SuperBowl #SB51 pic.twitter.com/P9MzXnyaxK

RT to save a Falcons fan pic.twitter.com/jaWlS2UQqn