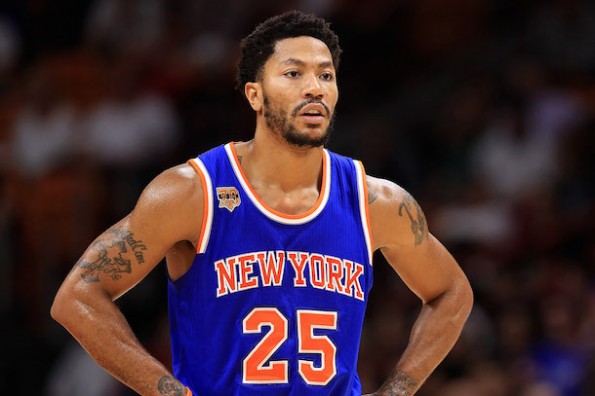 After being traded from the Chicago Bulls to the New York Knicks in the offseason, Derrick Rose claimed that the team, along with the Golden State Warriors, were the two ‘Super teams’ in the league.

The Knicks (at 28-47) were recently eliminated from playoff contention, while the Miami Heat (at 37-38) have been on fire over the last few months, and have turned their season around to put themselves in position to secure a playoff spot.

There’s a big difference between 28-47 & 37-38, but Derrick Rose didn’t let those facts stop him from saying the Knicks were more talented than the Heat.

“No, I think we’re more talented,” Rose said Friday before the two teams play in Miami. “But it shows that basketball is a team sport.”

Why didn’t that talent produce any more W’s in the win column?

“Any year in the league it’s about whoever catches a rhythm. No matter how your season is going, or where you’re at in your season, you can always catch a rhythm and they caught theirs at the right time, winning 12 or 13 games [in a row]. They’ve been playing great basketball ever since then, so we never caught that luck this year.”

The Knicks have a rising star in Kristaps Porzingis, but with Melo slated to make his exit during the offseason, this team likely won’t be any better next year.