>Total Pro Sports
NCAA
Update: Watson Kicked Out of Bar By Friends of TJ Yeldon For Dating His Ex-GF (VIDEO)

Update: Watson Kicked Out of Bar By Friends of TJ Yeldon For Dating His Ex-GF (VIDEO) 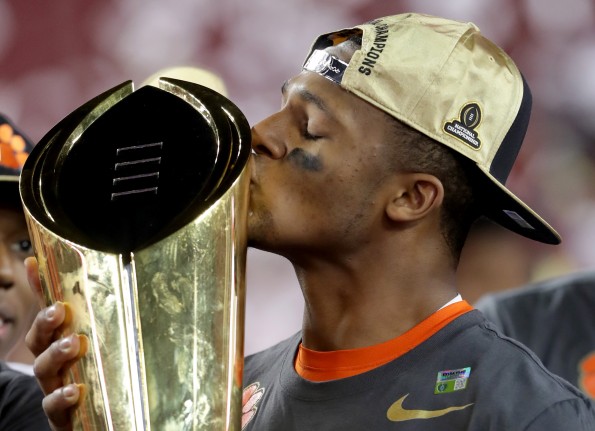 Friday night, Clemson Tigers QB Deshaun Watson was simply trying to get a bite at a Tuscaloosa bar and promptly left after it was reported that people did not want him there. Most assumed it was salty Crimson Tide fans who were still upset about Clemson beating them in the National Title game in January.

Nope. It was much deeper than a game.

Watson was actually told to get out by a couple of former Bama players who did not approve of him dating the ex-girlfriend of Jaguars RB & former Bama player TJ Yeldon. The two players were Ryan Anderson and Wallace Gilberry and footage has surfaced of them telling him to move along.

BREAKING: We have footage of Ryan Anderson and Wallace Gilberry telling Deshaun to get out of the bar pic.twitter.com/lZe002a8fW

That ex-girlfriend was in the gray pants in the first video and her name is Dallas Robson. Let’s take a closer look at what she looks like to see what caused all of this commotion.

Back to my old roots.. hahhaha get it? Thanks @moriahrmiller for always killing it on my hair! @matthews_co_salon