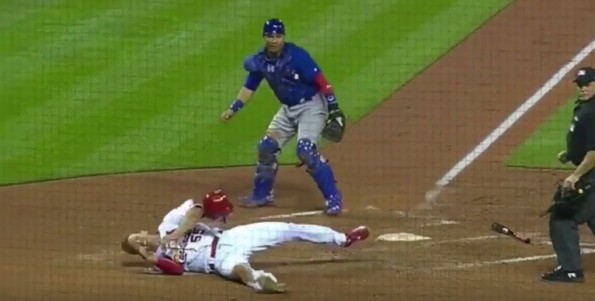 The St. Louis Cardinals only scored a single run during their 2-1 loss to the Chicago Cubs on Tuesday.  And while Stephen Piscotty‘s trip around the bases wasn’t enough to get the Red Birds the win, it will still be recognized as perhaps the hardest-earned run in the history of the game.

It all started when Piscotty was hit by a Jake Arrieta pitch in the right elbow. Then, while stealing second, he was hit in the left elbow by the throw from Cubs catcher Willson Contreras.  And finally, after a little dribbler handcuffed the entire Cubs infield, Piscotty successfully made it from second base all the way home, but while sliding to the plate, he took a Javier Baez throw to the head.

He was forced to leave the game with a head contusion.

Here’s a look at every painful moment Piscotty endured during his trip around the bases:

Unbelievable. Stephen Piscotty gets hit 3 times from his at bat to scoring at home. Each elbow and his head. Looks okay. pic.twitter.com/uVRYbfomq4

All of that for a single run.  In a losing effort.  You’ve got to appreciate the heart, though.

Here it is with some alternate play-by play, to help lighten the mood:

Stephen Piscotty + Scott Sterling = THE GREATEST VIDEO EVER MADE! pic.twitter.com/1bDiKozV7Y