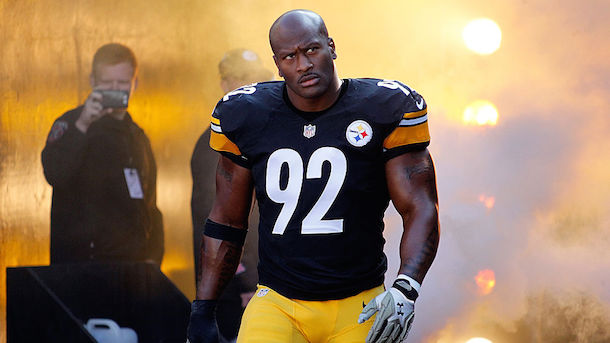 Pittsburgh Steelers linebacker James Harrison is a legendary gym rat. This past winter, after the Steelers earned a hard-fought playoff win on the road against the Kansas City Chiefs, their plane arrived back in Pittsburgh at 4 a.m. Instead of going home and going to bed, Harrison went straight to the gym to work out.

This is probably why, even as he’s about to turn 39 years old, James Harrison is still freakishly strong and effective. It’s probably also why he was subjected to nine “random” drug tests last year.

Harrison isn’t letting the PED suspicions cramp his style, though. This offseason he’s been at the gym pretty much every day, doing absolutely insane sh*t that normal people wouldn’t even dream about doing.

For example, here he is pushing a sled loaded down with 1,395 pounds in weights and trolling us “whippersnappers” who can’t do this even though we’re younger than him:

@vinnywill98 Hey whippersnapper, this is for you. Just in case you wanted to catch up 31 plate! I’m 39 Thursday so I may do 39 to celebrate this year!! @maurkicepouncey @theramonfoster @mikepouncey #oldmanstrength

Want more crazy James Harrison workouts? Here he is smashing a giant rubber ball against a wall so hard that he breaks the chain to which it is attached:

Here he is smashing a giant tire with a sledge hammer:

And here he is taking a walk with what looks like at least four hundred pounds of weights:

So how does Harrison recuperate after putting his body through all that abuse? Cupping and acupuncture, obviously:

I don’t know about you, but I’m gonna stick to basic curls, squats, and lunges, and leave this stuff to the professionals.