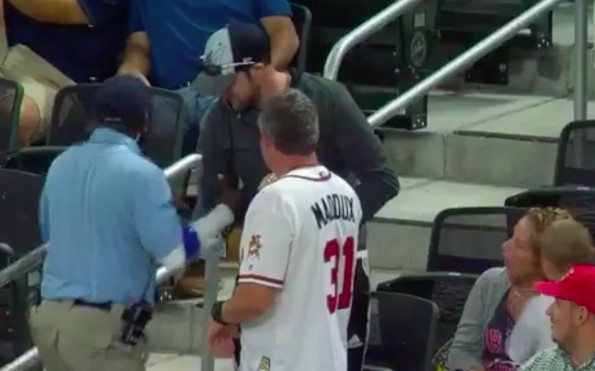 If you ever have the world’s tiniest problem, you’ll want to enlist the help of this power-hungry Braves security guard, who took his job a little too seriously last night.

After a ball was ripped fair down the right field line, a fan, not knowing any better, picked it up as it bent toward the crowd. He snagged it, but not three seconds later did a security guard jump over the rail and summarily eject the fan from the game.

Check it out here, along with the real kicker, which took place afterward.

here’s better quality.. and an update: Braves announcers said the team was giving the kid a signed baseball.. pic.twitter.com/VrwxUIkStT

Yup. When the ejected fan gave the ball to the little kid next to him, he TOOK the ball from the kid! Ridiculous, right? Even the announcers pleaded with the rent-a-cop to use a little “common sense.”

Fortunately, the Braves had more decency than that guy did. They made things right with the kid by giving him an autographed Freddie Freeman ball after the game AND inviting him back to a game for his birthday in June.

Now watch the video again and see how manic the security guard is as he storms around back and forth. It’s clear he had no idea what he was doing but felt he had to do SOMETHING during his little power trip.