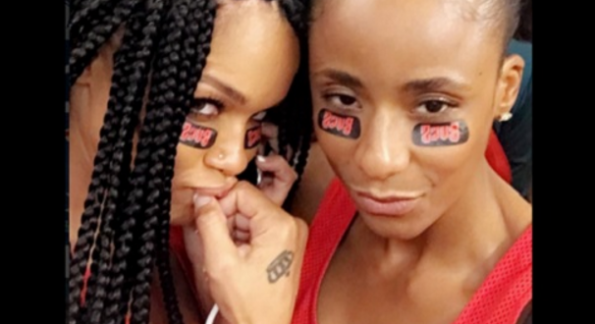 It’s been quite awhile, so Miko Grimes had to remind some people who she is again.

Tampa Bay Bucs CB Brent Grimes wife, Miko, is not one to take any type of disrespect and she will call you out on it every single time. This recent rant comes at the expense of NFL.com’s Greg Rosenthal after he stated she made more headlines last year than her husband did.

“In the Grimes Media Power Rankings, Miko topped Brent last season for headlines despite Brent turning in one of the most randomly dominant seasons ever for an aging cornerback. Expecting Grimes to back that up at 34 years old is unfair, and the Bucs are very thin after their starters at the position. The team will be targeted in a pass-happy division.”

Once the bit of info came across Miko – all hell broke loose in the form of a Twitter rant on Thursday.

How u cover the nfl & the only thing u can come up w/about the Bucs is “his wife made more highlights” when i CLEARLY DIDNT! @greggrosenthal

Ur a fucking pussy! Learn how to cover a team! Watch film bitch! And keep my man name out ur (cont) https://t.co/6Hp1mT7b8E

The above tweet continued, “Ur a fucking pussy! Learn how to cover a team! Watch film bitch! And keep my man name out ur fucking mouth AND MINE, fuck boy!”

This fucking idiot has 160K followers and knows NOTHING ABOUT FOOTBALL!!!!! Why are yall following this fucking DORK????? @greggrosenthal

LEAVE MY MAN THE FUCK ALONE!!!!! HE IS QUIETLY DISRESPECTING EVERYONE!!! BUT ALL YALL WANNA SAY IS HE’S WASHED! FUCK YALL! SUCK MY DICK!

U gotta be a stupid MFer to highlight the Bucs with “grimes will be washed” as ur highlight for the season. Eat shit bitch! @greggrosenthal

Fick Gregg and his bullshit ass two Gs in his name! He a pussy, not a G! https://t.co/j9nXCBt1dq

Love her or hate her, but Miko is going to protect her man at all costs.