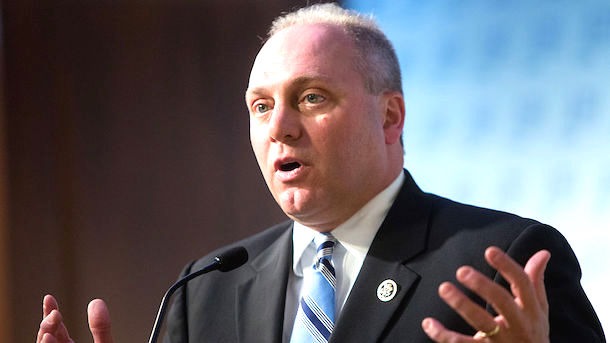 A gunman opened fire on the GOP Congressional Baseball team on Wednesday morning, injuring five people. Among them are two law enforcement officers, a Congressional aide, and Rep. Steve Scalise.

Scalise, the House Majority Whip, was shot in the hip. He underwent surgery at 9:45 a.m. and is in stable condition. Before that he was in good spirits and was able to speak to his wife by phone, according to a statement issued by his office.

The shooting took place at Eugene Simpson Stadium Park in Alexandria, Virginia. Police say gunfire was reported at 7:09 a.m., and they arrived within three minutes.

Rep. Mo Brooks (R-AL) was on deck when the shooting started. He says the shooter, who appeared to be a white male, was behind the third base dugout and fired a semiautomatic rifle.

Fortunately, because Rep. Scalise was there, the practice was being guarded by Capitol Hill Police as well as the Secret service.

“Nobody would have survived without the Capitol Hill police,” Pennsylvania Senator Rand Paul told CNN. “It would have been a massacre without them.”

“If not for the [security] detail who stepped up with basic revolvers, we would’ve all been dead,” he told the New York Times. He said he “Army-crawled” his way to the dugout, but bullets were hitting the dugout as well.

“Ting, ting, ting, ting,” he said, describing the sound of flying bullets. “He was hunting us at that point. There was so much gunfire, you couldn’t get up and run. Pop, pop, pop, pop — it’s a sound I’ll never forget.”

Arizona Senator Jeff Flake says he saw a member of Rep. Scalise’s security detail return fire on the shooter even though he had been shot in the leg.

Bullets from the ball field shattered windows at a nearby YMCA, though it is unclear if anyone there was injured.

Active shooter situation during this mornings trip to the Y. Terrifying. Am ok. Sheltered in place & under lockdown. pic.twitter.com/iJs6fZpjiK

Former Arizona Representative Gabrielle Giffords, who was shot and nearly killed in 2011, issued a statement on the horrifying events in Virginia via Twitter:

My heart is with my former colleagues, their families & staff, and the US Capitol Police- public servants and heroes today and every day.

So did President Trump:

Rep. Steve Scalise of Louisiana, a true friend and patriot, was badly injured but will fully recover. Our thoughts and prayers are with him.