Blimp Bursts In the Air, Explodes Into Flames at US Open (VIDEOS)
Golf

Blimp Bursts In the Air, Explodes Into Flames at US Open (VIDEOS) 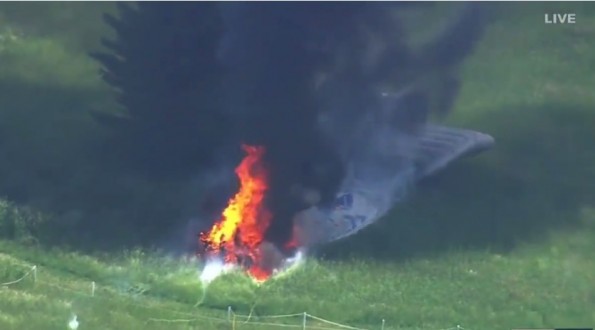 Rickie Fowler is off to a hot start at this year’s US Open at Erin Hills Golf Course in Wisconsin, but that’s not the biggest story of the day right now.

Rather, it’s that blimp that exploded into flames in the air just beside the course that has everyone talking on Twitter right now.

According to FoxNews, the blimp’s pilot was able to eject himself and parachute to safety, avoiding serious injury.  No one else is believe to have sustained any harm as a result of the crash.  The blimp was also not a part of the US Open Tournament, according to the USGA.

Here’s some footage that was shot of the exploding blimp:

Just got to the #USOpen and the blimp caught fire and crashed. People parachuted out. pic.twitter.com/1lDi3VkXCu