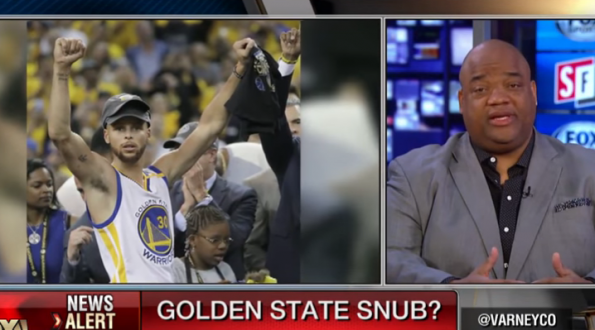 One day after defeating the Cleveland Cavaliers for their second championship in three years, a report came out that the entire Golden State Warriors team agreed to skip out on a potential White House visit, as many are not to fond of President Donald Trump.

Steph Curry told the San Jose Mercury News that he is not inclined to go to the White House.  He and NBA Finals MVP Kevin Durant, as well as other players, said the team would make a collective decision if necessary, after they get together as a group and discuss it.

In an appearance on the Fox Business Channel,, Fox Sports commentator Jason Whitlock made it clear that the Golden State Warriors should not follow the lead of social justice warriors and instead take advantage of the opportunity to engage in dialogue with the President, because it would be cowardly and un-American for them not to do so.

“This is a San Francisco, Silicon Valley-based basketball team. Steph Curry is part of that culture that instead of engaging with people we disagree with, we want to eliminate people we disagree with. American has never been about that. That’s not a healthy strategy. If Steph Curry and members of the Golden State Warriors have strong disagreements with President Trump, they should go engage him in debate and discussion, and make their disagreements known to him, and give him an opportunity to react. This whole thing of resist, and we’re not going to deal with this person, and we’re going to ignore this person, it’s unhealthy, it’s un-American, it’s really cowardly. I like Steph Curry a lot, but he is a young person being led astray by social media and people in this country that just want to overthrow everything.”