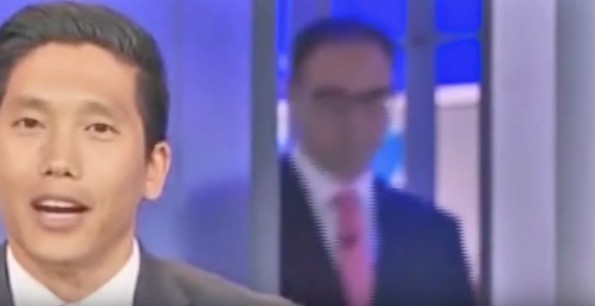 Yesterday, during all of the hoopla surrounding Gordon Hayward‘s decision to join the Boston Celtics, ESPN’s NBA insider Adrian Wojnarowski dropped his latest ‘Woj Bomb.’  But it was nothing like the typical ‘Woj Bombs’ we’re use to.

You see, Wojnarowski has been known for being the first to break most of the NBA’s biggest moves. In fact, he’s become so good at it, that someone even made a name for all of his breaking stories: “Woj Bombs.”

So when you hear that Wojnarowski dropped yet another ‘Woj Bomb’ yesterday, you’d probably assume that he was the first to report Hayward’s move to the Boston Celtics.  But he wasn’t. (That distinction belongs to ESPN’s Chris Haynes.)

Rather, Wojnarowski dropped a different kind of ‘Woj Bomb’; a ‘Woj Video Bomb,’ as he accidentally appeared in the background during a SportsCenter segment on the Gordon Hayward free agency drama.