>Total Pro Sports
Other
Who’s That Screaming Down the Hill on a Bike? Why It’s…A NUN?!?!?! (Video) 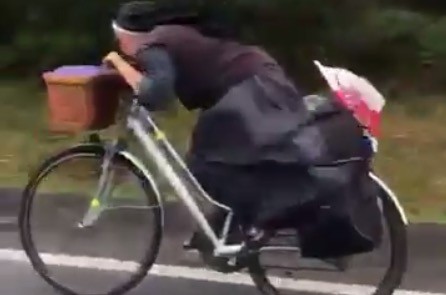 The less said about this video the better. I don’t know the nun’s name, if she was in a hurry, or why she was rocking her habit on a bike, but it sure does make for a great clip.

The guys recording this must have enjoyed the revelation about ten times as much as we do, because this isn’t something that just happens.

That nun descents better than you, @chrisfroome
: Bike Tech (via Fb) pic.twitter.com/y8YaV5TY0V

She is clearly late for an appointment with God or something, because that’s one aggressive tuck. Coupled with the basket and the non-racing bike, it’s a pretty sweet look.