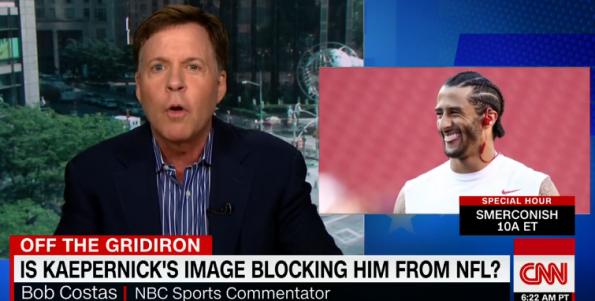 We are now less than two weeks away from the Arizona Cardinals and Dallas Cowboys facing off in the Hall of Fame Game to kick off the preseason, and Colin Kaepernick has only been contacted by the Seattle Seahawks in regards of getting a back-up position in the league.

While most want to deflect this issue and say it’s because of his poor play, the obvious reason he’s unemployed is because he upset a bunch of people with his kneeling during the National Anthem last year—in protest to numerous cop-related shootings of unarmed black men and the overall treatment of minorities in this country.

This story has gotten so big that NBC Sports commentator Bob Costas went on CNN to discuss it.  During his interview, Costas pointed out the hypocrisy of players committing numerous crimes and still receiving checks from teams, including the entire roster of the Cincinnati Bengals.  Meanwhile, Kaepernick kneels to bring attention to how badly people are being treated, and he is somehow vilified and blackballed.