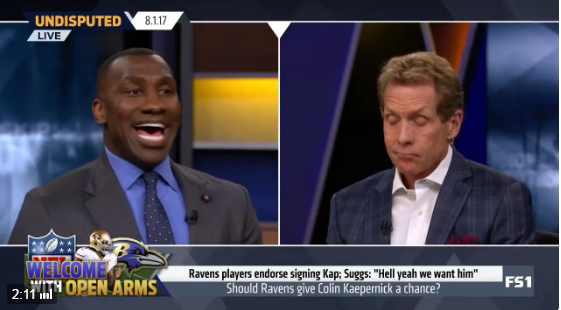 On Tuesday’s edition of the ‘Undisputed’, the conversation got real between Shannon Sharpe and his co-host Skip Bayless as they discussed the reason why Colin Kaepernick is disliked by so many “white people”.

Skip started it off by saying people can’t get past the fact that the former San Francisco 49ers QB ‘disrespected the flag.’ He then took it a step further by suggesting that most white people deep down know that Colin Kaepernick is right.

So supporting Fidel Castro, cops as pigs socks and comparing cops to slave catchers has nothing to do with his negative perception? — Matt Tracy (@silverfoxPGA) August 1, 2017

Please tell me u r not serious? Even if a white athlete, hence the female soccer player, takes a knee or doesn’t stand is 100% traitorous!!

He is NOT right, regardless of your color. The national anthem has nothing to do with law enforcement. “Hands up don’t shoot” was a lie. — Patrick Hooper (@P_Hoop) August 1, 2017

Sorry Skip, you’re not most white people. It’s not about race, it’s disrespect for a nation that gave him his opportunity to play in the NFL

I swear every single movie or show or news outlet is feeding this Race BS! Maybe teams dont want a backup u have to talk about every Sunday — James Hardy (@chytown23) August 1, 2017

He took a stand. If a team wants to sign him they will. My father served 20 years so that he would have the right to take a knee.