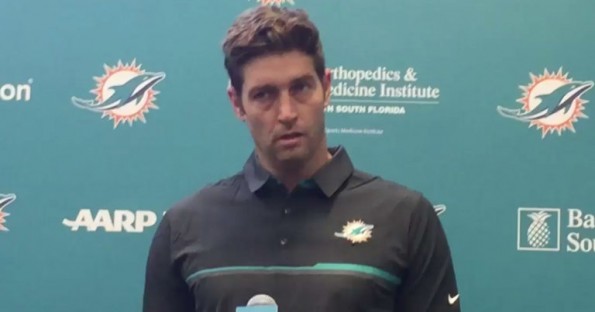 New Miami Dolphins quarterback Jay Cutler arrived in Ft. Lauderdale on Monday looking exactly how he looked when he played for the Chicago Bears for all those years.

Cutler spoke to the media at his introductory press conference at the team’s practice facility in Davie. People couldn’t help but to notice the crazy faces he was making. As a result, a meme was born and the jokes went flying.

When they called your bluff asking for $10 million dollars and now you actually have to work pic.twitter.com/xy7FItgXOf

BREAKING: Since joining the Dolphins, Jay Cutler has gone 10 entire hours without committing a turnover, setting a new personal record

This pretty much sums up Cutler’s attitude. pic.twitter.com/cZ2SAAjiNZ

Jay Cutler was born to be a meme.

Cutler seemed totally unimpressed with the Dolphins tribute to him. pic.twitter.com/nx9HgK0rMd

Jay Cutler being announced as the new lead singer of The Smiths pic.twitter.com/seAkjjJsqZ

“Yea, Gase called me up saying he wanted me to throw footballs and shit. He didn’t specify to which team, so I’m just gonna sling it.” pic.twitter.com/8d9EgociHT

my favorite thing about jay cutler is he never pretends football is anything besides his job. pic.twitter.com/C4juARuUuw

Nobody has ever been less excited for introductory press conferences than Jay Cutler pic.twitter.com/st6TymWt1V

Jay Cutler looks more excited for the season than me. pic.twitter.com/R4Hsq6EWVx

Jay Cutler has that look when you bid on something on @eBay and win by mistake. CC:@UncleChaps pic.twitter.com/AFJjurPalD

This is me when I have to go to work on Mondays #JayCutler pic.twitter.com/a9OlCaSCth

When you find out all the bars in Miami are non smoking pic.twitter.com/NxOoYiZdqK

Jay Cutler looks Ecstatic!! Between him and Tim Duncan, idk who we have to calm down more pic.twitter.com/jT3O7CuDBC