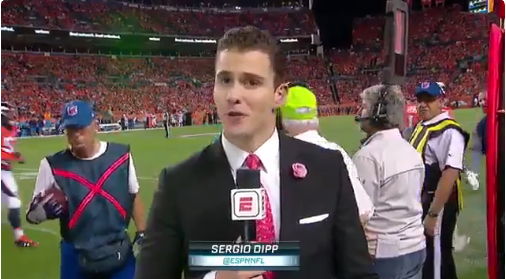 During the second quarter of the game between the Los Angeles Chargers and Denver Broncos, Beth Mowing and Rex Ryan cut to unknown sideline reporter Sergio Dipp. It took all of 15 seconds for him to become a household name, and it wasn’t because he did something great.

The clearly nervous reporter just needed to report on Denver Broncos head coach Vance Joseph, and either the thin air got to him or he choked during the moment, because he could seem to find the words to say. So he proceeded to deliver the worst sideline report of all-time, or at least in MNF history.

After social media roasted him mercilessly, he finally took to Twitter and responded to his new found fame for all the wrong reasons.

The only thing that was missing was him yelling out, “and boom goes the dynamite.”