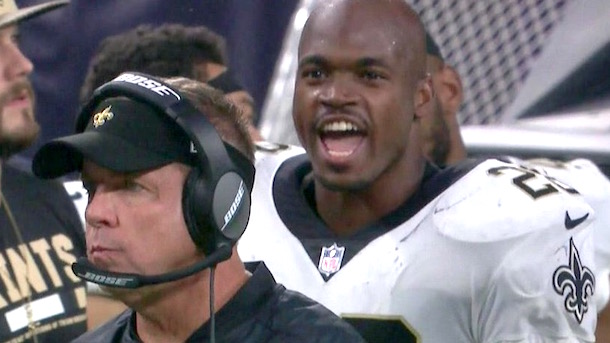 Saints running back Adrian Peterson and head coach Sean Payton say there is nothing to talk about with respect to the heated exchange captured by ESPN’s cameras on Monday night. In fact, both of them say there was no heated exchange.

“We weren’t in any heated exchange,” Payton told reporters after the game. “I’d tell you if we were in a heated exchange, so why don’t you ask him? I think he was into it; we were all into it. There was none that I can recall, and I’m being honest.”

Naturally, reporters did ask Peterson. He didn’t deny that something was said, but he did deny it was a heated exchange.

“It’s not my first time being in situations where…people jump to conclusions and make their own assumptions when they didn’t have no idea what’s going on or what was said,” Person continued. “I could’ve said, ‘I love you.’

So what did Peterson say?

When reporters asked him, Peterson said he was going to “keep that confidential.”

So basically, just go ahead believe whatever you want.