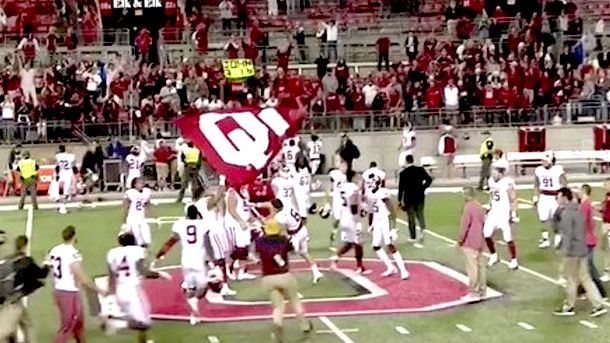 After Oklahoma defeated Ohio State at Ohio Stadium on Saturday, Sooners quarterback Baker Mayfield grabbed the giant OU flag from the spirit squad, ran to the middle of the field, and planted it right in the middle of the Buckeyes logo.

Personally, I thought it was fun and spontaneous and exactly the kind of thing that makes for great rivalries. But it turns out I was wrong. I’ve been informed that, actually, it was totally disrespectful and offensive to Ohio State fans, players, and coaches. You know, because college football is super serious, and stadiums are sacred grounds.

For that reason, at a press conference on Monday, most likely at the behest of Sooners coach Lincoln Riley, Baker Mayfield apologized for offending everybody. He said he “got caught up in an emotional win,” and he “did not mean for it to be disrespectful,” and “it should have been something [he] did in the locker room.”

I don’t know about you, but I feel much better now. I guess it’s time to go find something new to get offended about!