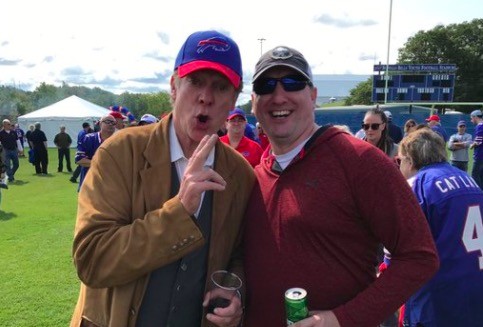 It’s not clear why the actor who played Shooter McGavin in Happy Gilmore, Christopher McDonald, was at the Bills’ tailgate festivities prior to their week one win over the Jets, but everyone sure seemed to put their questions aside and make the most of it.

Wearing a Bills hat, the actor made no qualms about joining fans for photos, rocking his signature move from the golf comedy, the “smoking pistol.”

It was cool bumping into shooter mcgavin today at the bills alumni party. Too bad I’m gonna have to beat his ass in the golf tourney tomorrow! #chokeonthatbabaahhh #happygilmore #GOBILLS

Shooter McGavin. “Stay out of my way, or you will pay, listen to what I say”. What a legend #happygilmore #shootermcgavin #heyboys #ohbigboys #buffalobills #shanties

You suck, you jackass from sports

Considering how many lame jokes he must have put up with while doing this, I think we should nominate him for sainthood.