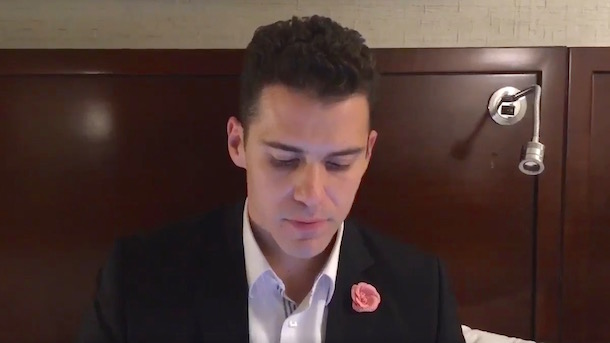 Sadly, it did not go as well as he had hoped.

Dipp stumbled right out of the gate, bumbling phrases and injecting awkward pauses into his report. He eventually found his footing and finished strong, but by then the damage was done. Twitter smelled blood in the water and was already tearing him to shreds.

Initially, Dipp responded to the criticism with humor, tweeting emojis and memes from the sidelines in Denver.

However, on Tuesday morning, after thinking about the situation some more—and perhaps after reading more mean tweets—Dipp decided to share some deeper thoughts on the matter.

“Growing up in the American environment as a minority, a minority like head coaches Vance Joseph and Anthony Lynn,” Dipp says. “So what I wanted to do was show some respect, making my debut as a minority on American national TV, the biggest show out there, on the most heartfelt day in this great country made up by immigrants and [from] some people’s perspective, it all went wrong. But I truly meant no disrespect. Because all I wanted to do was to show some love to these two historical head coaches. Hopefully I’ll have another chance and be sure I make the most out of it.”

Sergio, I think I speak for all reasonable people on the internet when I say, dude, you are overthinking this. It was an awkward segment, but Twitter tends to overreact to things. Shrug it off, move on, do better next time, and no one will remember this in a few weeks.