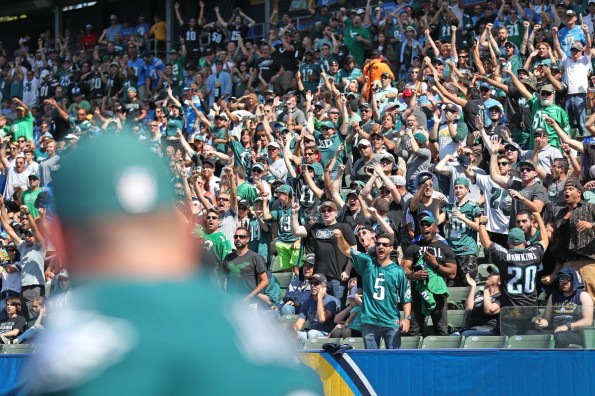 Much like their first two home games of the season, the Los Angeles Chargers walked into StubHub Center on Sunday and found themselves to be the away team, despite playing at their home stadium.

Philadelphia Eagles fans flooded the place, and gave their team a thunderous applause when they came onto the field. Despite playing on the other side of the country, the Eagles were essentially the home team.

At one point during the game, Eagles linebacker Jordan Hicks started pumping up the thousands of Eagles fans in attendance. He urged them to make noise while the Chargers were on offense. And they did just that.

Even on Twitter, Eagles players couldn’t stop talking about their home-field advantage in California.

Only team in the NFL with 9 home games this season!!! Thank you @Eagles fans!! #FlyEaglesFly

Philly fans WE appreciate y’all! This was a home game, we was just on the beach!!!!

Another tough road win.. Wasn’t pretty but found a way to WIN‼️ S/o to the Eagles fans for making it a home game. #birdgang #ganggreen

We appreciate all the Eagles fans in LA! Great family win!!! #FlyEaglesFly pic.twitter.com/ipGOzntJeg

Thank you to our amazing @Eagles fans for turning today into a home game! #FlyEaglesFly #RoadWarriors pic.twitter.com/0uTTh18FET