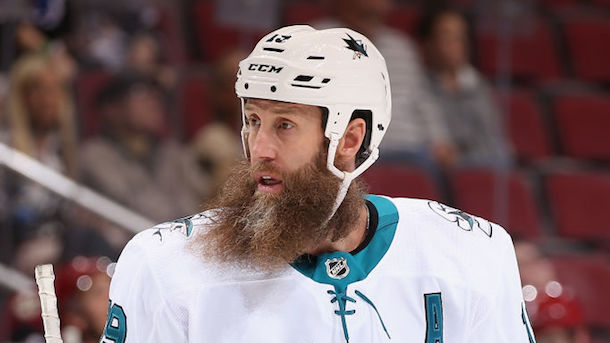 The San Jose Sharks have just unveiled a new Joe Thornton bobblehead, and it is easily one of the greatest bobbleheads in the history of professional sports.

Fans who buy two-seat ticket packs to see the Sharks host the New Jersey Devils on March 20 will get a bobblehead of Thornton with a life-like red and grey beard…and no shirt.

We believe this is Joe Thornton. He is walking around downtown San Jose and doesn’t give ONE HELL.

For those who might be a little confused, this bobblehead is a reference to a famous photo of Thornton that took Twitter by storm last fall.

On October 19, 2016, Thornton and Sharks teammate Brent Burns went for a walk on a particularly hot day in Pittsburgh, and Thornton decided to take his shirt off. Sure enough, Colin Dunlop, morning host for Pittsburgh’s 93.7 The Fan, happened to spot the pair walking around. So he snapped a pic, and it went viral almost immediately.

I believe this is Brent Burns and Joe Thornton. They are walking around Pittsburgh’s North Shore and don’t give ONE HELL. pic.twitter.com/T7t8LiLlBy

As you can see, except for the extra pectoral definition, the Sharks pretty much nailed Jumbo Joe’s likeness.

Easily one of the all-time classic bobbleheads.