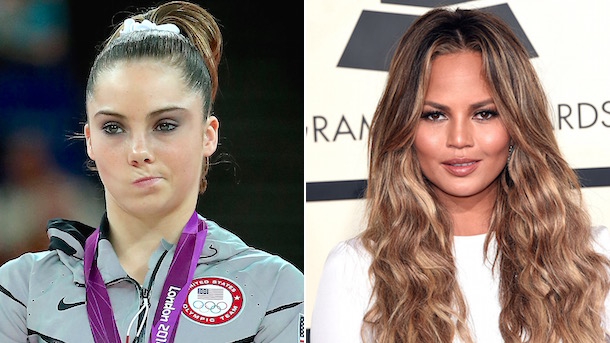 Earlier this week it was reported that former Olympic gymnast McKayla Maroney faced a $100,000 fine from USA Gymnastics if she spoke at the sentencing hearing of Larry Nassar.

On Tuesday, supermodel Chrissy Teigen got wind of that bullsh*t and made USA Gymnastics run for cover faster than a Falcons fan at Super Bowl 51.

Nasser, the former team doctor of USA Gymnastics, pleaded guilty in November to seven charges of criminal sexual conduct. However, he is actually accused of using his position of authority to molest over 120 gymnasts over the last few decades. Most of his victims were minors, and some were under the age of 13.

As first reported back in December, Maroney is currently suing USA Gymnastics over a nondisclosure agreement she signed as part of a $1.25 million settlement. Maroney says the NGA was illegal because USA Gymnastics forced her to sign it to get the money she needed for psychological treatment.

This week, Maroney’s lawyer said she would like to testify at Nassar’s sentancing hearing, which began on Tuesday, but that she faces a $100,000 fine for doing so. When Chrissy Teigen heard about that, she took to Twitter and offered to pay Maroney’s fine.

The entire principle of this should be fought – an NDA to stay quiet about this serial monster with over 140 accusers, but I would be absolutely honored to pay this fine for you, McKayla. pic.twitter.com/lsBEgEqZpD

Just a few hours later, realizing that it looked like they were trying to keep victims quiet, USA Gymnastics issued a statement saying they would not enforce the terms of the nondisclosure agreement if Maroney speaks at Nassar’s sentencing.

“USA Gymnastics has not sought and will not seek any money from McKayla Maroney for her brave statements made in describing her victimization and abuse by Larry Nassar, nor for any victim impact statements she wants to make to Larry Nassar at this hearing or at any subsequent hearings related to his sentencing. This has been her right and USA Gymnastics encourages McKayla and anyone who has been abused to speak out. USA Gymnastics remains focused on our highest priority — the safety, health and well-being of our athletes and creating a culture that empowers and supports them.”

McKayla Maroney responded to Teigen’s generous offer through her lawyer on Tuesday evening.

“I’m shocked by your generosity, and I just want you to know how much hope your words bring to all of us,” Maroney said. “I just can’t get over the fact that someone I don’t personally know is sticking up for me, let alone a strong women that I’ve looked up to for years!”