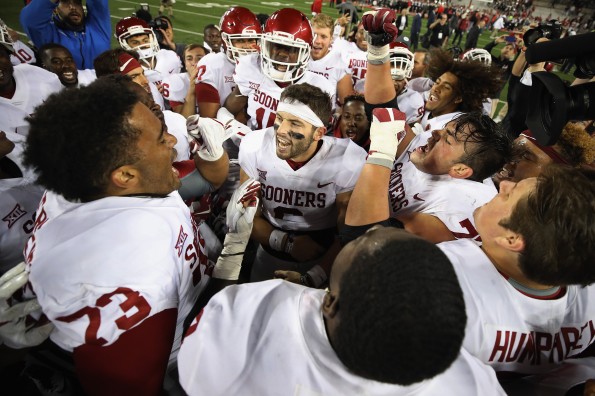 Back in September, Baker Mayfield and the Oklahoma Sooners went into Ohio State and avenged their loss from a year earlier by beating the Buckeyes, 31-16. That win would prove to be crucial in getting Oklahoma into the College Football Playoff, while leaving Ohio State on the outside looking in.

After the game, Mayfield was justifiably fired up, but he may have taken things a little too far in the eyes of Buckeye nation when he ran to midfield and planted the OU flag on the OSU logo.

Well, well, well…. That’s how it is, huh? pic.twitter.com/gjHb4Z5UfU

This week, Mayfield had to answer for his actions when he was confronted by a couple of Buckeyes players on a bus at the Senior Bowl.

Here’s how it all went down, via Sports Illustrated:

On a charter bus ferrying the North team to and from practices at Ladd-Peebles stadium, two Ohio State players surrounded Mayfield in his seat, blocking him in. Defensive linemen Jalyn Holmes and Tyquan Lewis stared down Mayfield, and one of them broke the silence: “What’s wrong with you, bro?”

A pregnant moment passed, then the three burst out laughing. “That’s what you get for kicking my ass the year before!” Mayfield said, referring to the Sooners’ 45-24 loss to the Buckeyes in Norman back in September 2016. The Ohio State pair admitted they probably would have done the same thing had the tables been turned.

So in the end, the Buckeyes players didn’t kick Mayfield’s ass, and everyone had a good laugh. I bet some of you were hoping for a different ending.

Sorry to disappoint you.