>Total Pro Sports
NFL
Tom Brady Didn’t Shake Hands with Nick Foles, and He Got Roasted For It On Social Media (TWEETS)

Tom Brady Didn’t Shake Hands with Nick Foles, and He Got Roasted For It On Social Media (TWEETS) 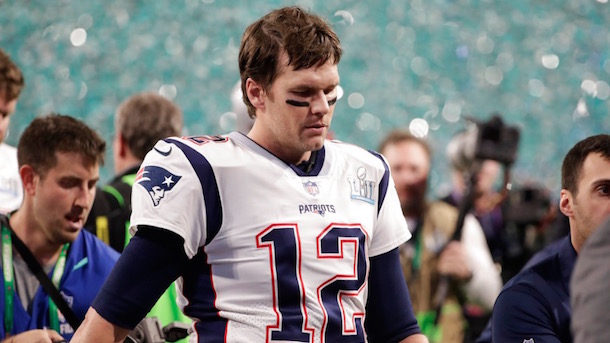 Tom Brady has won five Super Bowls, more than any other quarterback in NFL history. However, he still couldn’t find it in him to be gracious in defeat after losing to the Eagles on Sunday.

Here’s an interesting anecdote from ESPN’s Ian O’Connor about Tom Brady’s mentality after the game:

“He was staggering down a hallway wearing his game pants and a light hoodie, his sweat-soaked hair mussed and his eye black smudged. Brady passed Matt Patricia, the outgoing defensive coordinator and Detroit Lions head coach-to-be, and Patricia reached out and grabbed Brady’s arm on the way by. Brady looked down at the bearded figure in red and didn’t say a word. He cut through a curtain, took his seat for a news conference and tried to explain how a man could throw for a playoff-record 505 yards at age 40 and still feel miserable about it.

A lot of people will tell you that it’s precisely this “fiery competitiveness” that has made Brady what he is. They will tell you that, if Brady weren’t a sore loser, he wouldn’t win so much. And these people may be right.

But nobody gave Cam Newton a break when he didn’t shake Peyton Manning‘s hand after Super Bowl L. They called him classless, childish, a bad sport.

Luckily, Twitter is holding Brady, a.k.a. Mr. Perfect, accountable on this one.

Did anyone else notice how Tom Brady is such a SORE loser. No handshake, nothing! Just straight to the locker room!

Tom Brady’s worst move of the day was jogging off the field after the game was lost. Should have had the class to at least shake Nick Foles hand. #SuperBowl #FlyEaglesFly

Tom Brady didn’t congratulate Nick Foles and that’s all you need to know about Tom Brady.

Tom Brady didn’t shake hands with Foles after the game? What a fucking coward.

I love how Tom Brady doesn’t go shake hands after the game. Such a fucking arrogant prick.

I’ve been known to defend Tom Brady from time to time and point out that he’s not such a bad guy. But I’m not defending this. Losing sucks, but if Bill Belichick can suck it up and be a good sport, so can Tom Brady.