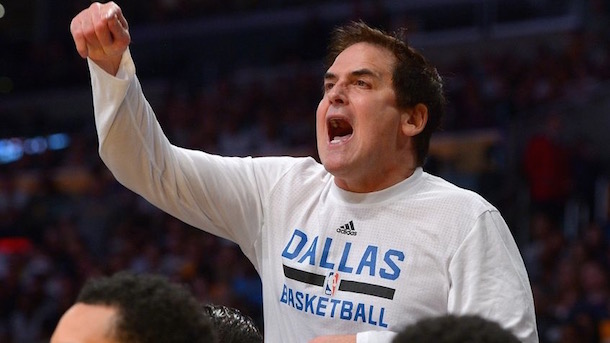 Sports Illustrated published an unsettling story about the Dallas Mavericks on Tuesday, detailing what they say is a “corporate culture rife with misogyny and predatory sexual behavior.”

In the story, several current and former female employees share stories of blatant sexual harassment by Terdema Ussery, the team’s former president and CEO. One woman says Ussery once asked her about her weekend plans at a team dinner before saying, with numerous ESPN crew members within earshot, “you’re going to get gang-banged, aren’t you?” Two other women say Ussery harassed them for years, with actions ranging from “inappropriate remarks to requests for sex to touching women’s calves and thighs during meetings.”

Ussery isn’t the only Mavericks employee called out by name, though. The SI report also talks about former Mavs.com beat writer Earl Sneed. In 2011 he was arrested during a domestic dispute with his girlfriend and eventually pled guilty to misdemeanor charges of family violence assault and interference with emergency request. However, he kept his job.

Then, in 2014, Sneed was involved in another domestic dispute. This time he was accused of hitting a fellow Mavericks employee, whom he was dating. The woman reported the incident to her supervisor and HR boss Buddy Pittman, but again, Sneed was not fired.

The Mavericks fired Buddy Pittman on Monday. Then they fired Earl Sneed on Tuesday. They also issued a vague statement on Tuesday, before SI even published their story. In it they claim they were unaware of the blatant workplace misconduct until now.

The Dallas Mavericks have received information about behavior in our workplace that appears to have violated the organization’s standards of conduct. It has been alleged that a former officer of the organization engaged in various acts of inappropriate conduct toward women over a period of years. This individual left the employment of the Mavericks nearly three years ago and the Mavericks have only learned of the scope of these complaints in the past days.

Unfortunately, the Mavericks’ claim that they had no idea any of this was going on is complete bullshit. Though Mark Cuban was not accused of sexual harassment by any of the women who spoke to Sports Illustrated, one employee did point out the obvious about the most hands-on owner in the NBA.

“Trust me,” that employee said. “Mark knows everything that goes on.”

Earl Sneed certainly agrees. He issued a statement of his own on Tuesday after getting canned, basically thanking Ed Pittman and Mark Cuban for not firing him sooner:

While both instances described in the report are damning and language used is not accurate, the two relationships described in the report are not something I am proud to have been a part of. I underwent much counseling after both situations, under the direction of Buddy Pittman, and I feel like I grew from that counseling. I also signed a contract stating that I would not have one-on-one contact or fraternize with female employees after the inaccurately described incident with my female co-worker, who was a live-in girlfriend. I abided by the details of that contract for four years, and received counseling during that period to avoid future instances.

I thank Buddy Pittman for helping me to grow during that time, and I thank Mark Cuban for his willingness to help facilitate that growth.

It sure sounds like Pittman and Cuban had a pretty good idea of what was going on.

I think Mark Cuban owes his fans an explanation.