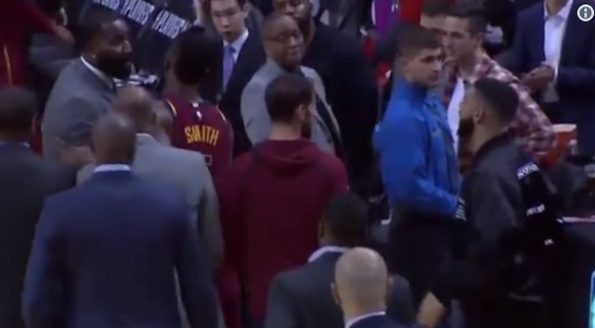 Last night the Cleveland Cavaliers held on to beat the Toronto Raptors in overtime to capture Game One of their Eastern Conference semifinal series. It was a thrilling contest to open the third postseason meeting between these two teams in as many years, but afterward it was a confrontation between two individuals who weren’t even playing in the game that had everyone talking.

Drake acting tough and barking at Kendrick Perkins may not end well for him. pic.twitter.com/LZsJHQQVXp

The two of them continued to go at each other following the final buzzer:

Why all the beef between these two?  Perkins took a moment to explain following the contest:

In a text message to ESPN, Kendrick Perkins says: “What happened was I was talking to my old teammate Serge (Ibaka) walking into halftime telling him ‘We about to win this game,’ and Drake butted in talking shit to me. So I said something back to him.” https://t.co/sJ3Ntx6zVy

Kendrick Perkins on the Drake confrontation: “I was f—ing with Serge (Ibaka), my old teammate” Perkins said after the game. “I wasn’t talking to (Drake). He said something slick so I said something back: ‘Sit your ass down and watch the game.’”