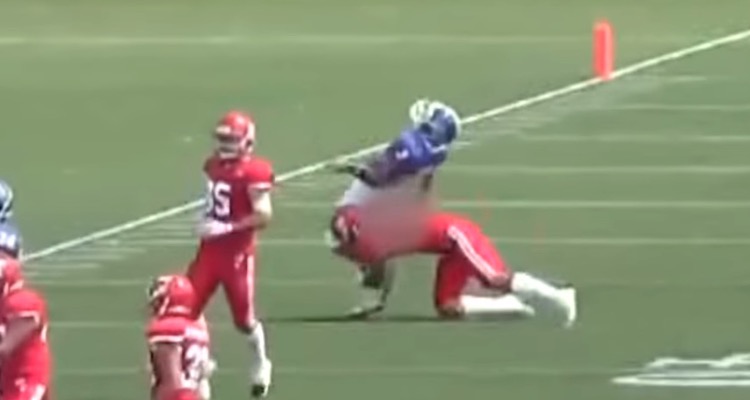 A Japanese college football player by the name of Taisuke Miyagawa sparked national outrage earlier this month when he deliberately injured an opposing quarterback with an absolutely vicious late hit.

On Tuesday, Miyagawa held a nationally televised press conference to explain his actions, during which he made the bombshell revelation that his coach ordered the dirty hit.

The incident occurred on May 6, during a game between Nihon University and Kwansei Gakuin University, Japan’s two most successful college football programs. On the first play of the game, Kwansei Gakuin quarterback Kousei Okuno rolled to his right and threw an incomplete pass. Long after the ball had hit the ground, Nihon defensive end Taisuke Miyagawa came barrelling in and took Okuno out from behind with a hit to the knees.

Okuno had to leave the game with back and knee injuries. Fortunately he’s only been ruled out for three weeks. Miyagawa was penalized for the late hit, but for some reason was not ejected.

After the game, the fallout began.

Uchida denied the allegations, but the fallout continued. Several upcoming opponents cancelled their games against Nihon. Meanwhile the university’s faculty issued a statement condemning the incident, and Japan’s Sports Agency called for an investigation.

Masato Uchida resigned as head football coach of Nihon University over the weekend. On Tuesday, Taisuke Miyagawa spoke to the media for the first time to share his side of the story.

He said Uchida ordered the hit in a message relayed by one of his assistants.

“After the practice (the day before the game), [assistant coach Tsumotu] Inoue said to me, ‘I asked head coach what you would need to do to play in the game. He said if you squash the quarterback on the first play, we would let you play. So go tell him ‘I’ll squash the quarterback, so use me,'” Miyagawa recalled.

Miyagawa says he went to the sideline and cried after the hit on Okuno, but his coach excoriated him.

“‘You are too naïve,'” Miyagawa recalled Uchida telling him. “‘You felt bad for the opponent, didn’t you?’ I wasn’t strong enough to say no. Though I was ordered by the coaches, I could have refused but went ahead anyway and acted. It was weakness on my part.”

A few days after the game Miyagawa and his parents asked if he could apologize to Okuno in person, but Uchida said no.

Okuno’s parents have since filed a police complaint, so both Uchida and Miyagawa could face further discipline for the hit. However, Miyagawa has already said he’s quitting the sport for good.

“I don’t think I have a right to continue playing American football,” he told the media, “and I have no intention to do so.”

What a sad and incredibly bizarre story.