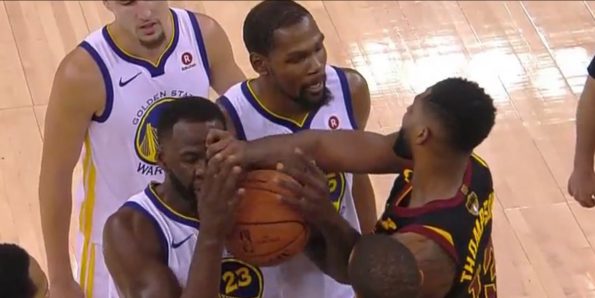 Late in OT during Game 1 against the heavily favored Golden State Warriors, the Cavs’ Tristan Thompson completely lost his cool after refs ejected him from the game. And to make matters worse, Draymond Green was right there to clap in his face and taunt him about it.

Tristan Thompson shoves Draymond Green after getting ejected…tells him to meet him after the game pic.twitter.com/zUIRnaZuGr

Thompson might be staring a 1-game suspension in the face for his actions, but many people who don’t like Draymond probably loved that he got what was coming to him in the end.

On social media, however, not everybody was feeling what Thompson did. Not because he might cost his team a valuable member on the court for Game 2, but because he was acting like a tough guy.

Los Angeles Clippers PG Patrick Beverley took to Twitter after the game and blasted Tristan for pretending to be a tough guy.

Now everyone in the League know @RealTristan13 is not tough. When did he become Mayweather