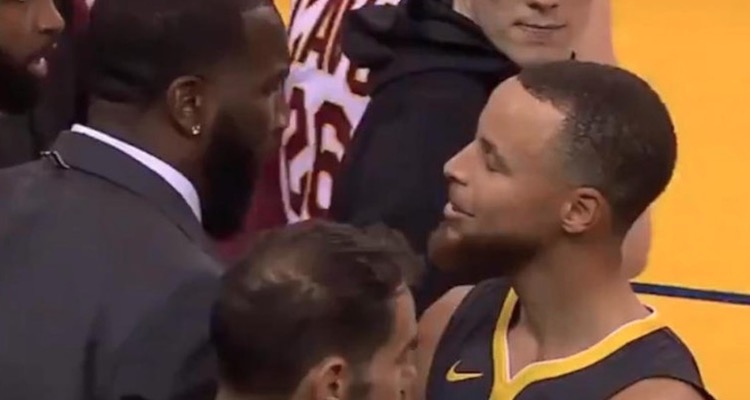 Steph Curry and some of his Golden State Warriors teammates got into a heated confrontation with seldom-used Cleveland Cavaliers center Kendrick Perkins at the end of the third quarter in Game 2 of the 2018 NBA Finals on Sunday.

We already knew what started the argument. Now we know what Steph actually said to Perkins. And it was absolutely savage.

“Multiple Golden State Warriors players” told ESPN after the game that they were upset that Perkins refused to move his legs and feet as Steph inadvertently backed into him following a wild shot at the end of the third quarter. The concern, obviously, was that Steph could have suffered a knee or ankle injury.

Curry was upset that Perkins didn’t move his legs out of the way pic.twitter.com/gCwhOygFS4

After Curry bumped into Perkins, he stood there looking at the guy. The Cavs big man then stood up and got in Curry’s face, and the two of them exchanged some words before a bunch of other guys jumped in. Curry then looked at LeBron, gestured toward Perkins, and walked away.

Steph and Perk exchange words after the 3rd quarter ? pic.twitter.com/EavuItDi1C

So what did Curry say to Perkins? We don’t have any actual audio of the encounter. But from another angle it’s pretty easy to read his lips.

That is a pretty savage burn.

In case you haven’t been keeping up with his career, Perkins, 33, appeared in just one game during the regular season and has not dressed for a single game in the postseason. The only action he’s seen was when he got into an argument with Drake during Game 1 of the Eastern Conference semifinals against the Toronto Raptors.

Getting back to Game 2 of the NBA Finals, it should be pointed out that, after his encounter with Perkins, Steph Curry went out and drained five three pointers in the fourth quarter. In total he scored 16 of his game-high 33 points, sticking the dagger in the Cavs and opening up a 2-0 series lead.

Next time Kendrick should just move his legs.