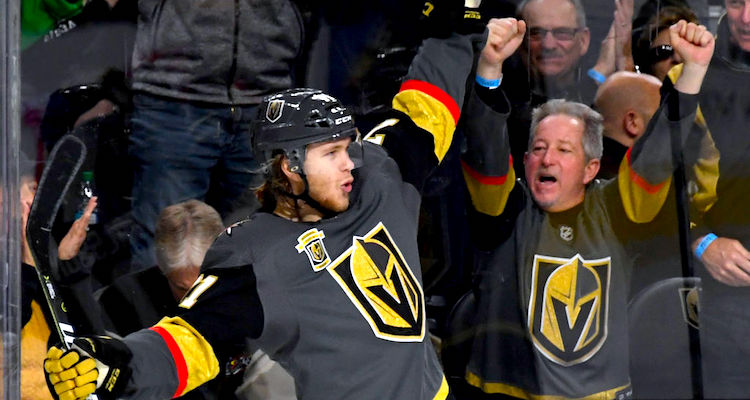 In his first two NHL seasons with the Columbus Blue Jackets, William Karlsson scored a grand total of 15 goals and 30 assists. Those are not exactly superstar numbers, so the Blue Jackets made Karlsson available in the expansion draft last summer, and the Vegas Golden Knights snatched him up.

How’d that work out?

Well, in his first season in Sin City, Karlsson suddenly turned into an NHL superstar. The 25-year-old Swede scored 43 goals during the regular season, good for third in the NHL. Then he helped the expansion Golden Knights reach the Stanley Cup Finals with another seven goals and eight assists in the Stanley Cup playoffs.

While the Golden Knights currently trail the Washington Capitals 3-1 in the Cup Finals, Karlsson has officially established himself as the Golden Knights’ first true star. And he’s got himself a bombshell celebrity girlfriend, too.

This week the New York Post pointed out that William Karlsson is dating Instagram model, former Bachelor contestant, and Las Vegas native Emily Ferguson. Their relationship hasn’t been a secret. Judging from her IG posts, Ferguson has been dating Karlsson since at least January. But for some reason nobody noticed until now.

Better late than never, though.

Here’s a look at the first couple of Vegas sports:

The Vegas Golden Knights continue to CREATE HISTORY?? so proud of this team and this man beside me. Onto the next one?#welcometoimpossible #stanleycupplayoffs #goknightsgo #round3

And here are a few shots just of Ferguson, because we all know that’s why you’re here:

☞Your perception of me is a reflection of you; my reaction to you is an awareness of me.☜

Ok Haley had me try @flexisfun with her and honestly I was so nervous but I’m glad I did. I’m shocked by how comfortable it is, you can’t even feel it and it really did help with my cramps. I hate how inconvenient tampons are but thought they were the only option so I continue using them. FLEX is the real deal. It’s body-safe, not linked to TSS and is wearable for 12 hours making it much more convenient. Use code: Emily3 to get a 3 month trial for only $12 + free shipping flexfits.com

At #revolvearoundtheworld but always supporting the Vegas Golden Knights??⚔ #fromdusttogold

I’m sorry…I can’t hear you over the sound of how wrong you are.

Good for you, William Karlsson.