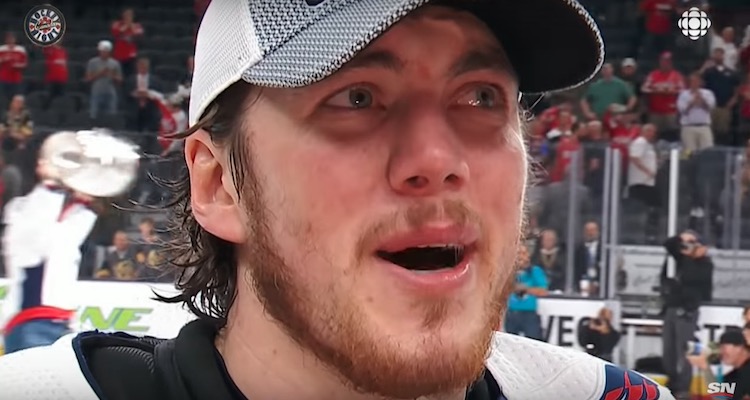 The big story heading into Game 5 of the Stanley Cup Finals on Thursday night was NHL great Alexander Ovechkin possibly hoisting hockey’s Holy Grail for the first time. However, when it was all said and done, and the Capitals had won the Cup, it was Ovechkin’s teammate, T.J. Oshie, who stole the show.

Oshie gave one of the most heartwarming interviews you will ever see to CBC’s Scott Oake after taking his skate with the Cup.

“Besides my wedding day and the birth of my two girls,” Oshie said, “this is the most amazing feeling I’ve ever had.”

When asked what the win would mean to his dad, Tim Oshie, who was diagnosed with Alzheimers back in 2014, things got emotional.

“You’re going to make me cry now,” Oshie said with a shaky voice as he wiped tears from his eyes. “He was diagnosed with Alzheimers, and he doesn’t remember a lot of stuff. But you bet your ass he’s going to remember this one.”

Prior to Thursday, Oshie was best-known to American sports fans for his shootout heroics against Ovechkin and Team Russia at the 2014 Winter Olympics.

Now he’ll always be known for this.

And in case you were wondering, Oshie did eventually find his dad in the crowd and bring him onto the ice to celebrate. The resulting photos are absolutely priceless:

Oshie and his dad, Tim. Sometimes a picture really is worth 1,000 words. pic.twitter.com/BiGQ1c0EAm

A picture worth a thousand words. @TJOshie77 lifts the #StanleyCup with his father! pic.twitter.com/vHJPYTBc0W

Now, go ahead. Use the phone in your hands to give your dad a call. I know you want to.