Alex Ovechkin Is Now Sleeping With The Stanley Cup (PICS) 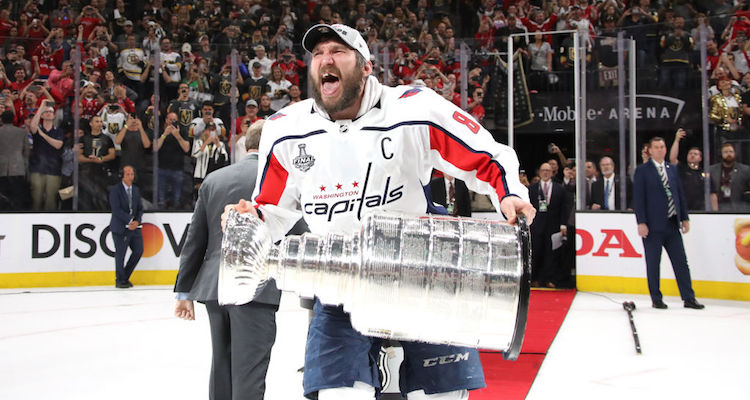 Whoever gets the Stanley Cup after Alex Ovechkin is going to want to give the thing a good cleaning with some antibacterial wipes, because Ovie definitely had his way with the thing over the weekend.

The Caps won the Stanley Cup for the first time in franchise history last Thursday and, understandably, team captain and future Hockey Hall of Famer Alex Ovechkin has been been partying with the thing ever since.

Here he is sipping champaign from the Cup at a Vegas nightclub:

Here he is throwing out the first pitch at the Nationals game with the Cup by his side:

When you win the Conn Smythe Trophy, you get as many mulligans as you want.#OnePursuit // #ALLCAPS pic.twitter.com/oJ0BfR9P60

Here is is drinking beer from the Cup at a party in Georgetown:

And here he is partying with the Cup and Ivanka Trump:

However, it turns out that Ovechkin’s relationship with the Stanley Cup is not strictly platonic. They’re not just friends from work. Oh no. Ovi took a page out of Joe Lacob’s book. He and Lord Stanley are sleeping together.

Ovi clearly loves having the Stanley Cup at home.

So like I said, whoever gets the Cup next…lots of Purell.